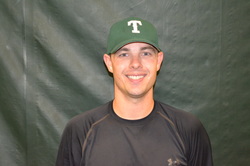 Mike Grady has 10 years of experience teaching, coaching, and training pitchers. He currently works with over 100 pitchers of all ages each year through private and group classes and elite training classes for high school juniors and seniors.

Grady returned to Malone University as the pitching coach in 2014 .He previously served in the same role for the Pioneers from 2005-2009, during which time  Malone’s hurlers experienced plenty of success, helping the squad break the school record for wins three times during Grady’s five years on the coaching staff.  The 2009 pitching staff ended the season with a team ERA of 3.07, which ranked #1 in the country in NAIA. Grady’s pitchers also set team records for shutouts (11) and saves in a season (18). In 5 years as pitching coach, his teams ranked first in the American Mideast Conference in ERA 3 times.

In the summer of 2010 and 2011, Grady served as the pitching coach for the Stark County Terriers of the Great Lakes Collegiate Baseball League. During this time, he coached 5 pitchers that went on to play professional baseball.

In 2005, Grady played professionally for the Washington Wild Things under John Massarelli, who also currently serves on the Pioneer coaching staff.  As a relief pitcher, Grady posted a 3-2 record with two saves and a 3.67 earned run average in 26 appearances.

He currently resides in North Canton with his wife, Lesley, and their son, Michael, and daughter, Audrey.  In addition to his coaching duties, Grady also serves as a Business Management teacher at Hoover High School.

Jon Pusateri is from from Randolph, Ohio. He went to Waterloo High School. As a three year varsity player was named an all-county player every year. His senior year he went 6-3, with 77 strikeouts and was named Waterloo’s MVP in 2010 after leading them to a district title. In his career at Waterloo he struck out 185 batters and was a standout in the classroom, totaling 11 academic-athlete awards, as well as being a member of the National Honor Society. After high school, Jon earned a baseball scholarship to the University of Akron. His freshman year he quickly worked his way into the starting rotation working to a 3-3 record with a 4.19 ERA. Sophomore year ended quickly due to a torn UCL. Jon underwent reconstructive surgery (Tommy John) performed by Dr. James Andrews. He returned to the mound his senior year and became the teams #1 starter with a record of 4-5 with a 2.58 ERA striking out 72 batters.

​After college, Jon signed a professional contract Gateway Grizzlies of the Frontier League. In 35 games in relief, he finished the seasons with a 3.15 ERA and 58 strikeouts. Jon was awarded the Rookie of the Year Award for the Gateway Grizzlies Organization.

Coach Ware has 21 years of coaching experience, 14 of those years he has spent at the varsity level. Ware spent 6 seasons coaching in the North Canton Program. He also held coaching jobs at Jackson, Malvern and GlenOak. Ware helped dozens of players get to the next level and play college baseball. Ware also has been an instructor of pitching, hitting, and fielding for the last 21 years.
Ware is 1991 graduate of Holy Name High School where he pitched and played the infield. Ware received All Ohio Honors his senior year (1991), was selected Plain Dealer Pitcher of the Year as well as named to North Coast League First Team. Ware continued his playing career at Gulf Coast Community College in Panama City, FL under the legendary coach Bill Frazier. Ware then finished his college career at Walsh University playing for long time and current coach Tim Mead.  After a successful college playing career, Ware graduated from Walsh University in 1997 with a Bachelor Degree in Education.
As a coach, Ware has had several 20 win seasons and gives all the credit to his players who put in the work to become a better player, teammate, and person. His motto is simply “WORK WINS”.
Ware currently resides in North Canton with his wife, Molly, and their two children Brody and Tanner. In addition to becoming a new member of Velocity Sports, Ware also teaches Science at Malvern Middle School in the Brown Local School District.
© Copyright 2022 Grady's School of Pitching, LLC. Use of any content from this page is not permitted without prior written permission.